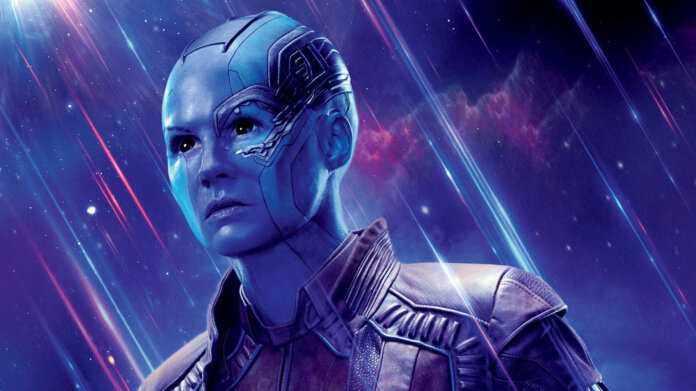 James Gunn’s Guardians of the Galaxy Vol.3 is perhaps the most anticipated Marvel movie from the Studio’s 2023 line of movies. The first two seasons of the franchise were loved by the fans and particularly after the big role that the GOTG played in saving the universe in the Infinity saga (Infinity War and Endgame), the fans have developed a special place in their hearts for them.

However, as director James Gunn had warned beforehand, the threequel will be very emotional and there is a chance that some members of the Group will be killed off. Now, a latest set photo has teased that one of our beloved characters from the Group is under threat.

The character in concern is Nebula who is played by actor Karen Gillan on-screen. As we all know, the shooting of Guardians of the Galaxy Vol.3 is underway and Karen Gillan posted a picture of herself in Nebula makeup from the set of the movie (probably inside her vanity van).

Fans have raised concern for the character after seeing the image as there are battle scars on Nebula’s face. Although she is covering her mouth with her hands, it is clear from the scars on her head and face that she has sustained damages from a battle scene. There are black burns and residue marks on her face.

Karen Gillan posted the image on her Instagram story with the caption: “I’m on around makeup 170th application, but I appreciate the cake anyway.”

Who might die in Guardians of the Galaxy Vol.3

James Gunn has been pretty infamous for killing off a fan favourite character from every Guardians of the Galaxy movie. In Vol.1, he killed off Adult Groot (luckily he regrew) and Yondu in Vol.3 which is to date considered to be one of the saddest scenes in MCU history.

So the question is, whose turn is it in Vol.3? Earlier it was being rumoured that Rocket the Racoon and Drax would be killed off in the third movie of the franchise but after seeing the battle wounds of Nebula, we are not quite sure.

Given the fact that Nebula has already undergone a complete story arc that transformed her character fully in GOTG Vol.2 and Avengers: Endgame, it is highly possible that the screenplay writers will kill her off as there is not much remaining in her character to exploit.

Guardians of the Galaxy Vol.3 releases on 5th May, 2023 and we must wait until then to find our answers.