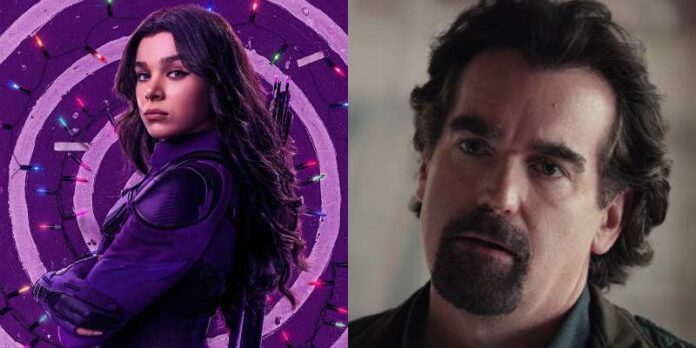 Kate Bishop’s father Derek Bishop, who was played by Brian d’Arcy James in the latest Disney+ Hotstar TV mini series ‘Hawkeye’ had only a small role to play in the Epilogue of the first episode.

He was seen trying to protect his family in the flashback of the Battle of New York (2012) and went missing ever since. Derek Bishop’s disappearance was however subsided by the scene where Kate Bishop saw Hawkeye Clint Barton for the first time when he saved her life from the Chitauri invaders. It was an important story arc as it was what inspired Kate to become a Superhero.

For the rest of the movie, it was assumed by the on-screen characters that Derek Bishop was dead. It was also necessary for the introduction of Jack Duquesne (‘Swordsman’ according to Marvel comics) as Eleanor Bishop’s new love interest and was quite believable for the audience.

However, a report from Cosmic Circus’ Lizzie Hill reveals that Marvel had plans of bringing back Derek Bishop for a plot twist in the final episode of Hawkeye. It would have provided the writers with an opportunity to become hell lot creative with the character but apparently the the directors wanted to keep it for Season 2.

Clint Barton’s Ronan has received a good enough closure in the first season and it would be unnecessary to pull the former S.H.I.E.L.D agent back in the second season as the protagonist. The second season, if it does take place, will rather exploit the adventures of Kate Bishop and thus bringing her father in would be a good development for the show.

Kate Bishop is parentless for now after turning in her mother for her criminal activities in the Season Finale. The one thing the first season has portrayed clearly is the complex relation between Kate and Eleanor. Kate clearly had a better bonding with her father (from what we saw in the first episode) and with him gone, it would have been difficult for the young archer to fit in with her strict mother all alone, without the affectionate support of her father.

Bringing in Derek Bishop will allow the writers to exploit the archaics of the Bishop family. The first season of Hawkeye, after all, centered a lot around the importance of family with Clint Barton trying so badly to get to spend a normal Christmas with his family.

What we know about Derek Bishop

According to MCU, Derek Bishop was a businessman who was closely related to the underworld. He owed a substantial amount of money to the Kingpin Wilson Fisk which was what brought Eleanor Bishop to the bad side of the business once he was deceased.

According to Marvel Comics however, Derek Bishop was the strict parent in Kate Bishop’s life after she lost her mother in an accident. Derek Bishop was much more aligned with criminal activities and his second marriage with a woman named Heather further distanced Kate from her father. The MCU has apparently decided to take a completely different path whatsoever and they can thus do anything they want with the character in the second season.