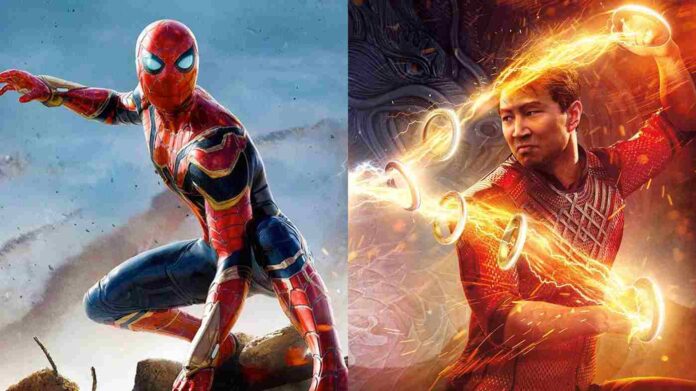 The year 2021 belonged to Marvel. The Marvel Cinematic Universe came up with some masterpiece movies and series (Disney+ MCU series) in 2021. MCU fans were introduced with the concept of Multiverse for the first time in 2021 through Marvel’s Disney+ series WandaVision and Loki. They added to that theory with their Magnum Opus film of the year, Spider-Man: No Way Home which became one of their most successful blockbusters ever.

Apart from these, MCU added a number of new characters in their roster with Shang Chi and The Legend of the ten Rings and Eternals. They also stuck to their small-scale projects with Hawkeye and Falcon and the Winter Soldier, both of which were again Disney+ series. Marvel thus expanded their cinematic universe ten folds in 2021.

No Way Home and Shang Chi get nominated for Oscars

They have now been rightfully awarded for their achievements as two of their movies – Shang Chi and The Legend of the Ten Rings and Spider-Man: No Way Home have been nominated for oscars.

Both the movies have been nominated for the same category – Best Visual Effects. A major part of almost every Marvel movie is made with CGI effects. Spider-Man: Now Way Home was almost entirely CGI manipulated. The fight between Peter Parker and Dr. Strange in the mirror dimension was probably the best Visual effects in the movie. It was done completely with the help of CGI.

Moreover, every Super-villain in the movie except William Defoe’s Green Goblin needed some sort of CGI manipulation – like Doc Ock’s mechanical arms and Electro’s glow. Not to mention, Sandman and Lizards were completely VFX made.

In Shang Chi, the final battle between Wenwu and Shang Chi which included the Ten Rings was undoubtedly the best scene of the movie. The visual effects and the details involved in that scene were just perfect. Moreover, the scene involving the Great Protector and the Dweller in Darkness was absolutely sensational as well.

However, many Marvel fans are disappointed as Spider-Man: No Way Home was not nominated for the Best picture award. However, the competition in that category was immense and as we all know, SuperHero movies are often not prioritized in these categories. “Belfast,” “Coda,” “Don’t Look Up,” “Drive My Car,” “Dune,” “King Richard,” “Licorice Pizza,” “Nightmare Alley,” “The Power of the Dog,” and “West Side Story” were all nominated for the Best Picture.

Although the two marvel movies are top contenders to win the Oscar for Best Visual effects, they have tough competition there as well. ‘Dune’, ‘No Time To Die’ and ‘Free Guy’ have also been nominated. Sci Fi epic ‘Dune’ is a favorite to win the award.