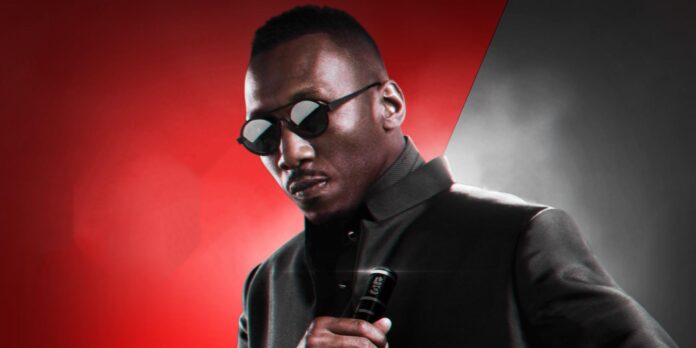 Mahershala Ali’s Blade is one of the most awaited Disney+ MCU movies of 2022-23. The project was confirmed by Marvel Studios back in 2019 at the San Fransisco Comic-Con and the project has been making some steady progress since then.

In the most unexpected scene in the post-credit of MCU’s Eternals, the fans were reminded of the upcoming movie by a cameo of Blade. When Kit Harington (playing the role of Black Knight) was about to touch the ebony sword, the voice of Blade actor Mahershala Ali warned him before it was cut.

According to some reports, we might see Black Knight teaming up with Blade to form a duo in the upcoming MCU movie. They might also receive some vigilante help from the Moon Knight, yet another character on whom Marvel has made a separate Disney+ series. Moon Knight will release on 30th March, 2022.

The preparation for Blade is now going on at full pace and the studio has recruited a known face from the DC Universe – Aaron Pierre.

Aaron Pierre was the last seen in the DCEU playing the role of Dev-Em in the SYFY series Krypton.

In Krypton, Aaron Pierre’s character Dev-Em was a Kryptonian soldier who wanted to marry Lyta-Zod, the character played by Georgina Campbell.

Earlier this week, it was revealed that Da 5 Bloods star Delroy Nindo will join the star cast of Blade.

For now, only these three actors have been confirmed for the TV series. Bassam Tariq, whose famous directions include ‘Mogul Mowgli’, ‘Ghosts of Sugar Land’ and ‘These Birds Walk’, is likely to direct the movie.

Those who have watched Blade (1998) and Blade: Trinity(2004) will know a lot about the character already. He is basically a superhero that battles vampires and Dracula. In the marvel comics too, he has been assigned the same task. He has previously worked with other Marvel Superheroes like Spider-Man, Captain Britan, Luke Cage, Doctor Strange, etc.

According to reports, Aaron Pierre might be seen playing the role of Hannibal King. Hannibal King is a supporting character for Erin Brooks and was even shown in Blade: Trinity. In the 2004 movie, he was played by Ryan Reynolds.

However, Aaron Pierre will not be the first actor to make a move across the two Superhero studios. Idris Elba, Ryan Reynolds, J.K Simmons, Tom Hardy, Halle Berry and Ben Affleck have all played roles in both MCU and DCEU.