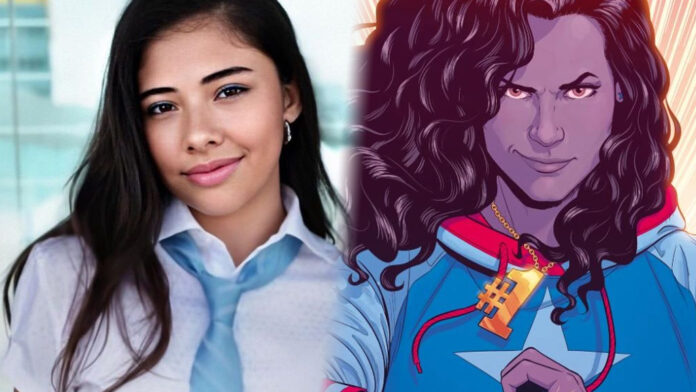 15 years old Mexican-American actor Xochitl Gomez will be making her MCU debut through Marvel’s upcoming Magnum Opus Doctor Strange in the Multiverse of Madness. It is the first time we will see her and her character America Chavez on scream and fans are extremely excited to discover what Marvel has in store for their new character.

Doctor Strange in the Multiverse of Madness will also star Elizabeth Olsen as Wanda Maximoff/Scarlet Witch and Benedict Cumberbatch as Doctor Strange.

America Chavez is an extremely important character for Marvel’s Phase 4. She has the ability to open star-shaped portals to any Universe or Timeline that she wishes to travel to and her abilities will be thus of utmost importance in Doctor Strange in the Multiverse of Madness. The movie will see Doctor Strange moving across many universes alongside America Chavez in order to fix the sacred timeline.

Meanwhile, Xochitl Gomez has revealed that getting this life-changing opportunity was not at all an easy task. In fact, she had to go through Marvel Studios’ strict audition process to get the role.

The process began in March 2022 when Xochitl, alongside many other actors, was asked to send an audition tape for an unknown Marvel project. Almost 5 months later, she heard again from them. This time they asked for another audition tape using a fake character name and a fake script.

After she sent in the second tape, she heard back from them in just 20 days and her agent informed her that they were indeed interested in her.

The screen testing was done at the original set and there she met Benedict Cumberbatch a.k.a Doctor Strange for the first time.

Just two days after returning home, Xochitl received a call from her agent who confirmed that she had got the role. Casting director Sarah Finn herself broke the news to her.

Doctor Strange in the Multiverse of Madness will not be the only project for America Chavez. Marvel has many things planned for the newly introduced character and Xochitl Gomez is highly likely to join the Young Avengers team alongside Hailey Steinfield as Kate Bishop, Florence Pugh as Yelena Belova and many more characters. The Young Avengers will be MCU’s next big-budget collab movie series.