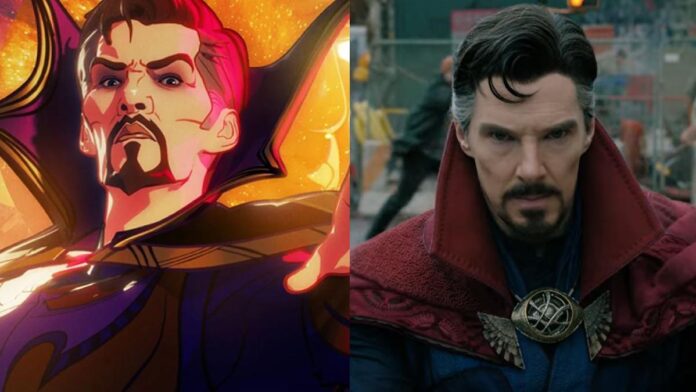 Doctor Strange in the Multiverse of Madness is the upcoming Magnum Opus project of Marvel Studios. It is set to release on 6th May and with the level of hype that has been going on around this movie gives a clear indication that is is growing to blowup the Box-office records completely. There is no doubt in the fact that it would be Marvel’s second successive Blockbuster hit after Spider-Man: No Way Home.

A number of old and new characters from across Marvel’s universes will be appearing in the movie. Professor Charles X Xavier of X-Men, Fantastic 4 leader Mister Fantastic, Namor, Deadpool, Wolverine and a bunch of other exciting characters are set to make their MCU debut through Multiverse of Madness and that is what makes it so unique and this is what the hype is all about.

Apart from characters across the Universe, a number of variants of MCU’s existing characters like Doctor Strange and Wanda Maximoff are also set to appear in this movie. We have already been familiarised with Evil Strange and Defender Strange in the Trailer and the teaser.

However, a recently released official Marvel LEGO set has teased the appearance of yet another Doctor Strange variant – Supreme Strange.

Those who have seen the fourth episode of the animated Dinsey+ MCU series “What If…?”, will be familiar with the character. Basically it is one of the darkest and the strongest variants of Doctor Strange. In that storyline, Doctor Strange turns to dark magic to save change an absolute point in time to save his deceased girlfriend Christine Palmer and corrupts himself in the process. The prospect of his arrival into the MCU is thus very exciting.

However, the appearance of the leaked LEGO character resembles the statue of Doctor Strange that we saw in the trailer. Both of them do not have any beard (unlike the other variants of Doctor Strange) which is a differing characteristic from “What If…?”’s Strange Supreme.

Although Supreme Strange’s possible intrigues us, it is also a concerning factor. “What If…?” gave us an elaborate depiction of how Supreme Strange got corrupted to a point where we even start feeling bad for him. The limited runtime of Multiverse of Madness will not allow Sam Raimi to do that and showing Supreme Strange without giving any hint about his past life will be injustice towards the character.

So what do you think – will we get to see Supreme Strange in Doctor Strange in the Multiverse of Madness?