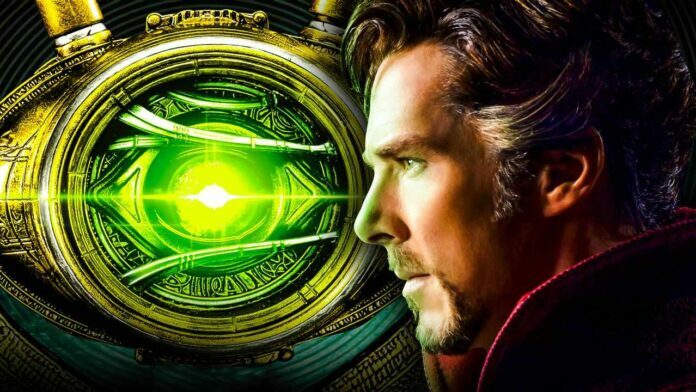 The fate of Eye of Agamotto in MCU – So Far

In the battle of Titan which saw the Guardians of the Galaxy, Iron Man, Doctor Strange and Spider-Man team-up to face the Mad Titan Thanos (who was already in possession of 4 of the six infinity stones), we witnessed Thanos crushing Strange’s eye of Agamotto with his bare hands.

Well, he also said “Fake” after crushing which might lead many fans to believe that Strange simply just got the real one back after returning back from the blip but a bigger question still lies unanswered – If the infinity stones were atomized in Avengers: Endgame and Strange does not possess the Time Stone anymore, why does he still keep the Eye of Agamotto with him all the time?

The simple explanation for this is that the Eye of Agamotto has way too many functions than just holding (or protecting) the time stone.

By looking closely at the footage from Multiverse of Madness and Spider-Man: No Way Home and exploring the Eye of Agamotto’s origin, we can decode this artefact’s true nature and powers.

One particular scene from the trailer of Multiverse of Madness shows Doctor Strange opening a door to the Utopian parallel using the Eye of Agamotto. He uses the same hand gesture as he used to do previously to twist the eye open and bring out the Time Stone. However, this time the Eye of Agamotto emits a golden glow instead of the green glow which suggests that it has a function beyond housing the time stone.

Eye of Agamotto used instead of Sling Ring

The fact that Doctor Strange used the artefact to unlock a door to a different dimension as opposed to using a sling ring portal proves that just like the eye can see through magical illusions, MCU Doctor Strange is using it to bypass some other magic that his sling ring can not detect or breakthrough.

Another instance that proves this theory is when Doctor Strange encounters Spider-Man in the mirror dimension in No Way Home. The Eye of Agamotto glows golden and twists open right as Strange tells Peter “It’s the Mirror Dimension Where I’m in control.”

The Eye of Agamotto is way more powerful than you think

We know that the Eye of Agamotto was made by the great sorcerer Agamotto himself. In Marvel comics, it has powers way beyond what the MCU could possibly show on-screen. So Marvel decided to make it time-centric only.

The Director of Doctor Strange (2017) had once said that “Surprisingly, it was something that just evolved organically. The Eye [of Agamotto] in the comics is too powerful! The Eye is a Deux Ex Machina device – it doesn’t matter how bad a situation Doctor Strange is in, it’s like, ‘Wait! The Eye of Agamotto! Let me take the Earth to the other side of the solar system!’ It could do anything at any time. So we ended up working into the idea that it was used for time manipulation, and that just organically led us to, ‘Well, why don’t we put the Time Stone in it?’ And it worked!”

According to Marvel comics, Agamotto created three different eyes – one of Knowledge, one of Power and one that is considered to be lost in time.

The first eye of Agamotto was used in the comics by Doctor Strange to defeat Dormammu and thus the one we saw in the MCU up to Avengers: Infinity War was perhaps the first eye. The Eye of Agamotto that we are now seeing (in No Way Home and Multiverse of Madness) would thus be either the second one which means we will see the third eye (considered to be the most powerful) in Doctor Strange 3.

Who has the other eye of Agamotto?

Another strong point to prove this was seen on Disney+ MCU’s Loki series. The void of pruned people has a broken Sanctum Sanctorum in it which suggests that at some point, a Kang variant had conquered a Sanctum Sanctorum and kept all of its artefacts to himself. This might prove how he got the third Eye of Agamotto.