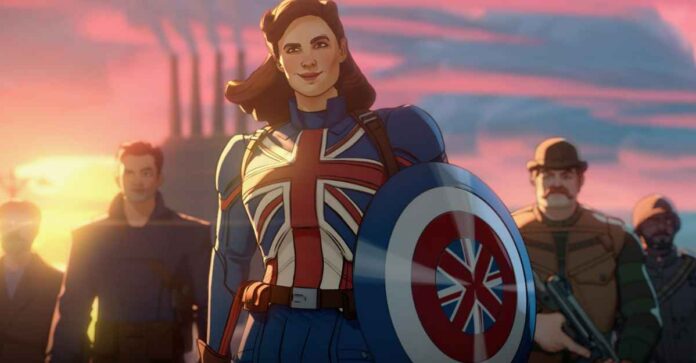 The rumoured list of Marvel’s Comicbook characters that are reportedly set to make their respective debuts in Doctor Strange in the Multiverse of Madness is growing every day.

The appearance of Professor Charles Xavier (Professor X, played by Patrick Stewart) and Superior Iron Man (played by Tom Cruise) is almost confirmed by now. Disney+ has now teased the appearance of a “What if…?” character in Doctor Strange 2 as well.

“What If…?” was the first animated MCU series of Disney+. It explored the idea of the alternate universe and gave us a taste of different realities from the MCU storylines that we have seen in the past. For example – What if T’Challa became Starlord and Killmonger became the Blackpanther.

One of the most unique episodes of the “What if…?” season 1 was the first episode in which we witnessed the story of an alternate universe in which Peggy Carter was given the Supersoldier serum and she became Captain America instead of Steve Rodgers.

In the climax of the episode, she had to pass through a Multiversal portal and entered the current timeline. She was later summoned by the Watcher to join the Guardians of the Multiverse in the final episode. Alongside Black Widow, Hawkeye, Strange Supreme, Starlord T’Chala, Thor and Killmonger as Black Panther, Peggy Carter defeated Ultron.

According to rumours and the current teaser of Disney+, Peggy Carter’s version of Captain America can make her live-action MCU debut in Doctor Strange in the Multiverse of Madness. Hayley Atwell, the Peggy Carter from Captain America: The first avenger (2011) can be seen playing the role.

The rumours started when a sight of Peggy’s Vibranium shield from “What If…?” was spotted in one of the shattered glasses of Doctor Strange in the Multiverse of Madness’ official poster.

When Doctor Strange fell through universes and timelines with America Chavez, there was a scene when they moved from a prehistoric timeline to a universe that seemingly resembled Marvel’s comic-book world. This could be how the animated Peggy Carter could move from the “What if…?” universe to the live-action MCU. However, all these are just theories.

Fuelling the rumours, Disney+ just teased the appearance of Peggy Carter in Multiverse of Madness through a cryptic post on their Twitter account. They tweeted: “It seems that shield has recently reappeared somewhere … 🤔 doesn’t that sound like ‘Madness’ to you #CaptainCarter and all the episodes of #WhatIf are waiting for you on #DisneyPlus !” with a picture of Peggy Carter from “What if…?”.

So what do you think. Will we see Peggy Carter as Captain Marvel in Doctor Strange in the Multiverse of Madness?

Share
Facebook
Twitter
Pinterest
WhatsApp
Previous articleDoctor Strange in the Multiverse of Madness Confirmed and Rumoured Cast, all details
Next articleRobert Pattinson reveals he made the same mistake as Christian Bale while trying out Batman’s Voice