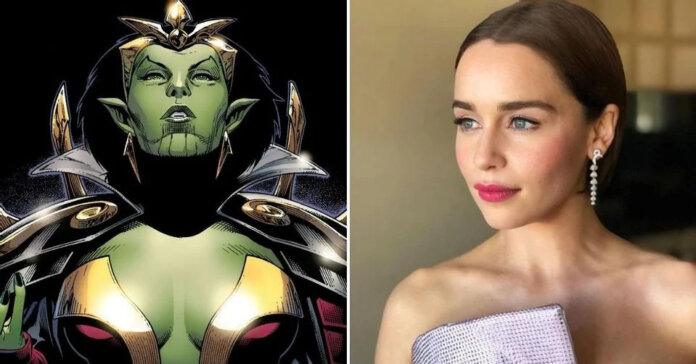 After months of keeping fans in dark, the makers of Secret Invasion are finally opening up on the details of the upcoming Disney+ MCU series. A couple of days ago, it was confirmed that Game of Thrones fame star Emilia Clarke who is a featuring in the series will be playing the much-anticipated role of Veranke, the Queen of the Skrull Empire. However, the character has been tweaked a lot and we shall be talking about that and some other interesting rumours regarding the series in this article.

Unlike the Marvel comics where Veranke has been portrayed as a much more independent and powerful character, the upcoming MCU series will reportedly portray her as the daughter of Talos.

We saw Talos previously in Captain Marvel and also in Spider-Man: Far From Home under the disguise of Nick Fury. He is an ally of Nick Fury and will be seen to play a central role in Marvel’s upcoming Disney+ series Secret Invasion.

Marvel’s Secret Wars comic lineup has a massive storyline is massive and it is not humanly possible to mention even half of that in the limited series. Thus, it is being rumoured that the show will be much smaller in comparison to the comic-book events.

As far as the Pre-reshoots are concerned, aren’t revealing any MCU superheroes to be Skrulls which was one of the key plots in the comic-book lineup. They are most likely saving that part for the follow-up movie event. Secret Invasion will thus simply be a Nick Fury/Talos show and the Introduction of Emilia Clarke as Veranke will be one of its key attractions.

These rumours will undoubtedly kill the high expectations of many of those fans who had dreamt of a comic-book accurate series.

Marvel’s Secret Invasion will be released on the OTT platform Disney+ most probably in the first half of 2023 right after the release of Black Panther: Wakanda Forever. Samuel L. Jackson will be making his much anticipated return in the Marvel Cinematic Universe through this series and it will be interesting to see where the character of Nick Fury head from here.