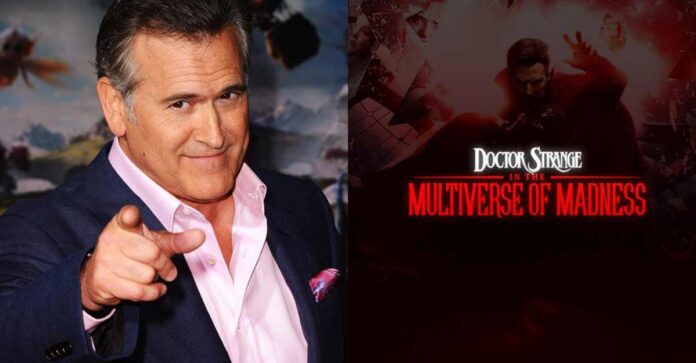 Sam Raimi’s Spider-Man Trilogy is one of the most loved versions of the web-slinging Superhero. Released in 2002, Spider-Man was the first Marvel superhero to hit the theatres and it became an instant hit. Sam Raimi’s brilliant direction combined with Tobey Maguire’s spot-on portrayal of the character won the fans over in no time. However, one of the underrated aspects of Sam Raimi’s Spider-Man trilogy would have to be the hilarious cameos of Bruce Campbell.

Bruce Cambell was a close friend of Sam Raimi and he made an appearance in all three of his Spider-Man movies. In fact, he is often called the ‘Stan Lee’ the RaimiVerse as he made cameos similar to what we generally saw Stan Lee doing in the Marvel Cinematic Universe.

From a Ring announcer in Spider-Man(2002) who gave Peter Parker his superhero name to a Snooty Usherer who would not let Peter inside Mary Jane’s play in Spider-Man 2 (2004) to ultimately being a French Maître D’ who tried to help Peter propose to Mary Jane (which ultimately failed) in Spider-Man 3 (2007), Bruce Campbell has played a wide range of characters in the trilogy.

The most amusing fact about his cameos was that his characters from every movie did not have any connection to the character that he played in the previous movie.

It was rumoured that if the Fourth instalment of Sam Raimi’s Spider-Man was ever made (Spider-Man 4), Bruce would be cast in a much more important role. Raimi is said to have offered the role of Quentin Beck a.k.a Mysterio to Bruce Campbell but the actor himself later debunked those rumours.

Bruce Campbell makes a big revelation about Multiverse of Madness

However, with director Sam Raimi now returning to the MCU to direct Marvel’s upcoming Magnum Opus Doctor Strange in the Multiverse of Madness, it was believed that Bruce Campbell might have a little cameo in it as well.

In fact, the actor himself has confirmed that he has shot a cameo scene for the film. But while doing so he also teased the appearance of a Marvel character that has been ‘beloved for years’.

Seeing the other rumours that have been going on about the movie, we can infer that it could be Tobey Maguire’s Spider-Man or Hugh Jackman’s Wolverine. Or is it someone completely unexpected?