Fan Theory: Doctor Strange in the Multiverse of Madness could introduce us to a new Watcher 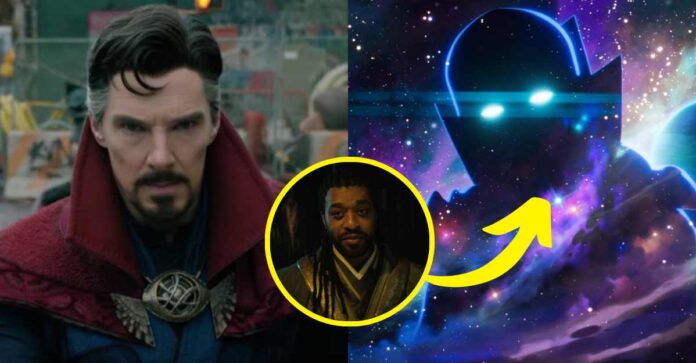 An insane fan theory has recently suggested that a character that we saw in the trailer of Doctor Strange in the Multiverse of Madness, could in reality be the new Watcher of the Marvel Cinematic Universe.

According to Marvel folklore, Watchers are one of the oldest entities in the Universe. They are committed to observing and compiling the knowledge on all aspects of the universe that they are assigned, without interfering in their matters.

In MCU’s Disney+ animated series “What If…?” season 1, we saw the Watcher Uatu breaking his oath to not interfere in the events of a universe in order to stop Ultron from destroying the entire Multiverse after he had acquired all six of the Infinity stones.

He recruited a team comprising of Superheroes from across the Multiverse. They were called the Guardians of the Multiverse and were assigned the duty of stopping Ultron from achieving his mission.

They succeeded in doing so after Strange Supreme trapped Ultron and Killmonger in a pocket dimension for eternity. Although the Guardians of Galaxy ended up winning the war, it was unclear whether the Watcher’s actions will have some consequences. However, some fans now think that the Watcher Uatu might be replaced in Doctor Strange in the Multiverse of Madness by someone worthier.

Fan theory suggests Mordo might be the new Watcher !

The trailer of Multiverse of Madness shows Doctor Strange being brought into a trial room at the Illuminati headquarters. The Illuminati has thus been portrayed as a bigger version of the PVA (that we saw in Loki). They have thus been shown as some sort of timekeeper of reality – perhaps the biggest form of it.

Seeing the close connection between Mordo and Illuminati, many fans have thus suggested that the Secret timekeeping organisation might have made Mordo the Watcher of this universe.

Mordo had left abandoned sorcery at the end of Doctor Strange (2016) when Doctor Strange used the Time Stone to make a deal with Dormammu, breaking their principles.

Mordo had warned Strange that his actions would have severe consequences and it turned out to be true. “Yes, we did it. No price to pay. We broke our rules just like her (Ancient One). The Bill comes due,” he had said.

Even in the trailer, Mordo said to Strange: “Your desecration of reality will not go unpunished.”

Mordo is one of the most strict believers in the proper safeguarding of the sacred timeline and he would be a perfect fit for the role of the Watcher.

It would be interesting to see if Sam Raimi even tries to exploit this possibility in Doctor Strange in the Multiverse of Madness.