Who is Rintrah? Comic origin, Powers, Weaknesses, History and Future in MCU 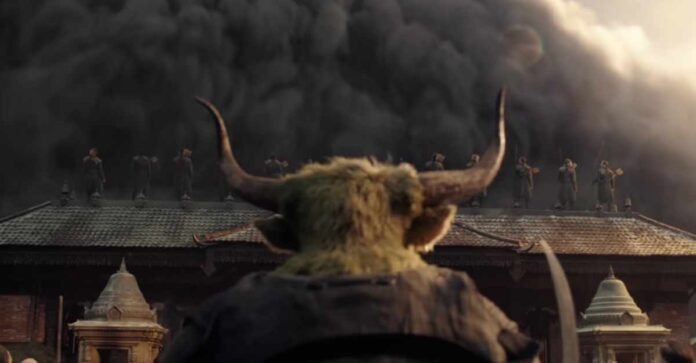 Rintrah, or the bull-like creature that was shown in the trailer of Doctor Strange in the Multiverse of Madness, is a character from Marvel’s Doctor Strange comic books. He made his debut on 2nd September 1986 with Doctor Strange #80 where he had a cameo appearance. Created by Peter Gillis, Rintrah has always been a famous apprentice of Doctor Strange.

In this article, we shall be talking about the comic book origins, powers and abilities, history, weaknesses, and future in the MCU of the beloved character.

Although many think Rintrah is a Minotaur, he is in reality a being belonging to the extra-dimensional planet of R’Vaal. The people of the planet R’Vaal all looked like a green-colored Minotaur (a character from Greek Mythology). Rintrah was one of the smartest beings on his planet.

It is assumed that he has magical potential and identifying that, he was taken by Enitharmon the weaver, who was a sorcerer from another dimension. Enitharmon started teaching him sorcery and made him his apprentice.

In Doctor Strange #80 (1986), Doctor Strange asked Enitharmon to repair his cloak of levitation after he tore it during a fight with the semi-humanoid cat-like creatures ‘The Khats’.

Enitharmon asked Rintrah to return Strange his cloak after it was repaired. However, upon arrival, Rintrah saw that Strange was badly wounded while fighting a demon sent by a Gevaltian Urthona.

Strange’s physical body was badly injured and thus he had to astrally project his soul to two of his friends – Morgana Blessing and Sara Wolfe’s bodies.

Rintrah then took Strange’s body and borrowed a spaceship from Mister Fantastic Reed Richards. They went to Urthona’s home planet and were able to beat him and rescue his captives Wong and Topaz.

In this way, he became known to Doctor Strange and soon ended up being an apprentice of the Sorcerer Supreme.

On his return to earth, Rintrah requested to serve Doctor Strange who rejected the proposal. However, he helped him win the battle against Water Elementals and Khats.

Rintrah started staying at Kamar-Taj and studied there. Later, Doctor Strange accepted him as his apprentice.

He started living at Kamar-Taj with Doctor Strange. There he served his master and did the usual chores just like the students of Kamar-Taj used to do.

The R’Vaalian is pretty well known for his funny antics and added comic relief to the Doctor Strange comics.

The incidents where he turned a pile of garbage into a monster and tried to attack Strange’s fellow colleague from the Defenders and Illuminati group Namor are still some of the best comic book moments of Rintrah.

He later became a teacher at the Strange Academy, which was a special school founded by Doctor Strange to train young sorcerers in the world. He taught the subject MATH-01 there.

Unbelievable Strength – Due to his R’Vaalian body, Rintrah is extremely strong and he has well-built muscles. He once defeated Hulk comfortably when he was possessed by a demon. Although he has horns and hooves too, he prefers not to use them much.

Sorcery – Rintrah is said to have the potential to become as powerful as Doctor Strange and Enitharmon someday in terms of sorcery. He can perform astral projection, dimensional traveling, and lightning spells.

Weaver Magic – Thanks to his first master Enitharmon, Rintrah was able to see the ‘String of Fate’ around living beings. With it, he could tell the history of any living being touching one of the strings. Even Dr. Strange could not do such magic.

Shapeshifting – He was able to change his appearance into humans on earth. He loved to transform into the favourite actors that he saw on TV.

True Form – Rintrah would often forget to cast a spell to change his appearance and thus the local people on earth would get scared by him.

As we know by now, Rintrah was spotted in the trailer of Doctor Strange in the Multiverse of Madness. He was seen standing at Kamar-Taj with the other sorcerers when it was under attack by a mysterious cloud.

He can be shown as an apprentice of Doctor Strange in the upcoming movies.

Share
Facebook
Twitter
Pinterest
WhatsApp
Previous articleFan Theory: Doctor Strange in the Multiverse of Madness could introduce us to a new Watcher
Next articleWho is America Chavez? Comic origin, Powers, Weaknesses, History and Future in MCU