Who is America Chavez? Comic origin, Powers, Weaknesses, History and Future in MCU 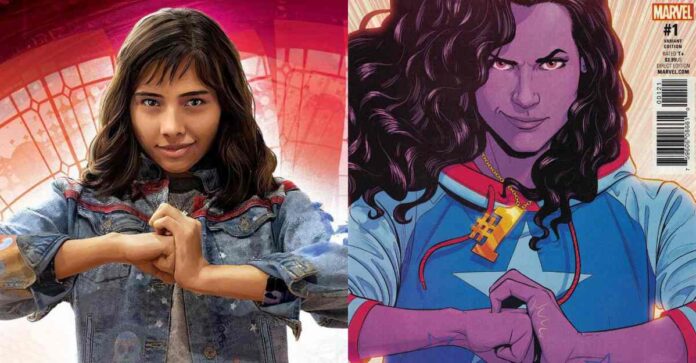 America Chavez is one of Marvel’s new age superheroes who did not make a single Marvel Comic appearance until very recently in September 2011 through Vengeance #1. Created by Joe Cassey and Nick Dragotta, the Mexican-American teen is a part of the Young Avengers group and is also the second character to take up the name ‘Miss America’.

She is supposed to make her MCU debut through Doctor Strange in the Multiverse of Madness and is expected to be a part of MCU’s Young Avengers project alongside Kate Bishop (Played by Hailee Steinfeld), Kamala Khan a.k.a Miss Marvel (to be played by Iman Vellani in the upcoming Disney+ Hotstar show Ms Marvel and many more.

In this article, we shall be focusing on the Comic book version of America Chavez and in the last bit, we shall talk about her possible future in the MCU.

Although there are many different origin stories of America Chavez, her most recent origin story is the most widely regarded one.

America and her sister Catalina suffered from a rare Genetical disease called Edges Syndrome that gave them both superpowers. However, the disease disrupts their body’s hold of energy that is required to use their powers.

Their two mothers – Amalia and Elena Chavez were expert pathologists and microbiologists themselves and they were trying to find a cure for their two daughters on a private island owned by Billionaire Mr Gales.

Mr Gales (who was also a mad scientist himself) was fascinated by the idea and he tried to examine America to find out why she was not killed by Edges Syndrome. He wanted to implement that to a bunch of other girls who were also suffering from the disease.

Mr Gales built the Utopian Parallel which was a massive dome inside his facility where time worked differently. It allowed the girls to live longer so that they could be studied for longer periods of time in an effort to basically cure Edges Syndrome.

When America Chavez started showing signs of cure and her superpowers Mr Gales saw that he could open portals. He motivated her to use her powers against her Mothers’ will. It angered her mothers. They also came to know about some undisclosed evil motives of the Mad scientist.

Upon knowing this, Elena Chavez planned an exit for all the kids. Amalia died in an attempt to close the portal to the Utopian Parallel and Elena was shot to death by Mr Gales in front of all the girls.

They were able to fight Mr Gales and his guards while America opened a star-shaped portal to someplace else. She tried to pull Catalina in but Mr Gales held her and she saw the Island getting destroyed, thinking that Catalina along with all the other girls was dead.

As she saw her mothers and sister die at such a young age, she is said to have assumed that she came from a Utopian Parallel that existed outside of the Multiverse. It was the child’s way of coping with her losses. However, in reality, it was Marvel trying to link her previous origin stories to the new one.

America was adopted by the Santana family after being separated from her mothers and sister. She had lost her memory in the process and took some time to remember it all. No one would believe her when she tried to tell them about her true identity and origin but they were shocked by her ability to fly when she saw a dove one day.

Despite the Santana family wanting her to ‘keep it low’, America became a small-time vigilante in Washington Heights. It led to a serious altercation between her new parents and she finally denounced the surname ‘Santana’ to take up her original surname Chavez.

She went on to become an active member of the Teen Brigade and Young Avengers.

Creating Star Portals – America Chavez can smash open star portals through which she can travel through the multiverse. She can do both – travel through dimensions and also through time with her power. She can also use this offensively.

Superhuman Speed- America Chavez is insanely fast. She can move at a tremendous speed even in her light form where everything stands still.

Self-propelled Flight – She can fly and move about doing so at great speed.

Bullet-Proof and Flame Retardant – She is extremely invulnerable can also survive in the vacuum of space without any problem (Wondu would be so jealous of her !). She is Bulletproof and also flame retardant.

Superhuman Strength – America Chavez is unbelievably strong. She almost defeated Loki in a fight and the Asgardian god always had words of high praise for her.

Energy Infusion – Able to harness the power from within (inherent power).

Longevity – Unlike the other beings from the Utopian parallel who age at a normal rate, America Chavez has an increased lifespan. She gained this power after coming to prime universe earth.

Hyper-Cosmic Awareness – America Chavez has great awareness across the happenings of the multiverse. It means that she has a metaphysical insight into the Multiverse and knows what is happening where.

Edges Syndrome – A genetic disease related to the XX chromosomes which inhibited her powers. She has significantly less power in her origin where she had Edges Syndrome compared to the one where she came from Utopian parallel.

America Chavez is a very important character to introduce the Multiversal concept to MCU and that is exactly what she will do in the movie.

She is also said to be a part of the Young Avengers movie lineup in the future.