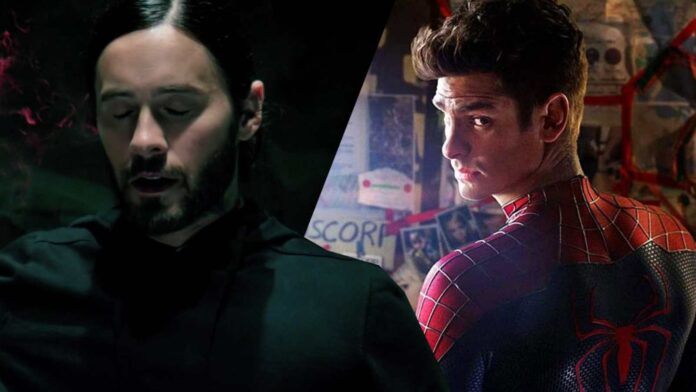 Sony’s upcoming Spider-Man spinoff movie Morbius (2022) was initially scheduled to release on 28th January. However, just a few weeks before the scheduled release, the makers postponed it to 1st April. The official reason that Sony gave for this was the surge of COVID-19 cases due to the new Omicron variant. However, some fans believe the actual reason is something completely different.

MCU’s Spider-Man: No Way Home was a massive box-office success. In fact, it became one of the highest grossing Marvel movies ever, that too at a time when COVID-19 had taken a great hit at movie revenues.

The appearance of Tobey Maguire and Andrew Garfield’s Spideys from their respective Universes was extremely emotional for Marvel fans.

He finally got his much deserved closure in No Way Home and #MakeTASM3 was the world wide no. 1 trend even days after the release.

Now, some fans have claimed that Sony might actually listen to the fans and Andrew Garfield’s Spider-Man might return in the suit in Morbius (2022).

Fan Theory: Venom, Morbius and Andrew Garfield’s Spider-Man might be in the same Universe !

Morbius will be the origin story of Dr. Michael Morbius, a nobel prize winning Biochemist who turned himself into a Living Vampire in an attempt to cure his rare blood disease – getting Superhuman abilities and a thirst for blood in the process.

Morbius, who is usually known as an antagonist of Spider-Man in Marvel Comics, will be the second anti-hero Spider-Man spinoff movie that Sony is releasing (the first was Venom).

The trailer of the movie showed graffiti of Spider-Man with the ‘Murderer’ painted over it on the walls of a lane that Michael Morbius was walking past. It immediately raised the question – “Are Morbius and Andrew Garfield’s Spider-Man in the same universe?”

The Trailer also showed an Oscorp building in the skyline of the city Morbius lives in. There was also a mention of “that thing in San Francisco,” which we think might be a reference to Venom.

Many fans thus think that Venom, Morbius and Andrew Garfield’s Spider-Man all exist in the same Universe. If this is in fact true, Sony might be secretly preparing for a possible Sinister Six lineup for The Amazing Spider-Man 3 starring Andrew Garfield as the web slinging superhero. This also explains why Sony possibly risked showing Michael Keaton as the Vulture in Morbius’ trailer.

But what does the word ‘Murdered’ written across Spider-Man’s graffiti imply? In Spider-Man: No Way Home, Andrew Garfield said that after the death of Gwen Stacy, he tried to go back to being the friendly neighbourhood Spider-Man but he got frustrated and ‘stopped pulling his punches’ at some point.

This might mean that at some point, his Spider-Man could have killed an enemy or crossed the line in someway which divided the world in opinions about the Super hero. This was what the word ‘Murderer’ might mean.

According to many, seeing the success of No Way Home and the hype about Andrew Garfield, Sony decided to add some more hint of the star’s presence in the same universe in the movie Morbius. Many think that Andrew Garfield might even be featured in the post credits scene of Morbius. All this, however, is just rumour as of now and nothing has been confirmed yet.