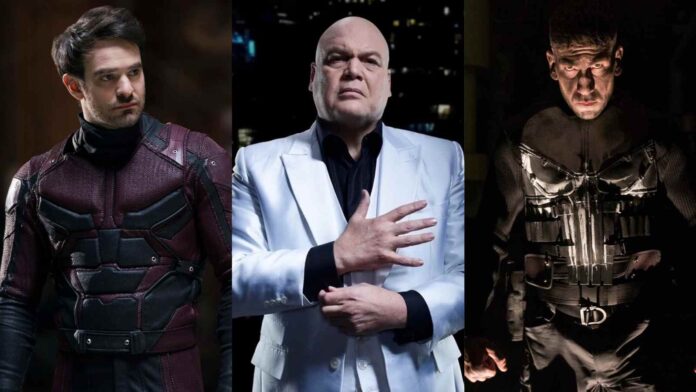 Netflix has announced that its popular Marvel Cinematic Universe shows like Daredevil, Punisher, Jessica Jones, Iron Fist, Luke Cage and the Defenders will no longer be available on the streaming platform from March.

The relation between Netflix and Marvel had been complicated right from the beginning and things worsened in 2018 when Netflix had to cancel the 4th season of Daredevil due to a rift between the two companies.

The worst part is, it is not confirmed yet as to which platform will stream the series after March, leaving Marvel’s DefendersVerse fans in a fix.

The Daredevil is till date one of the highest rated MCU series and fans love it for many reasons. It is a shame that it will have to be taken down from Netflix so abruptly without a prior solution.

However, MCU has started including the DefendersVerse characters in their latest movies and TV shows. Vincent D’Onofrio who played Wilson Fisk a.k.a Kingpin in the Netflix shows recently appeared in the latest Disney+ MCU series Hawkeye. It thus looks like the characters have a future in MCU after all.

Charlie Cox also appeared in Spiderman: No Way Home as Matthew Murdock a.k.a Daredevil himself and it proves that Marvel is trying to bring its famous characters out of Netflix into the MCU.

After Netflix stops streaming the MCU shows, there is a high chance that they will soon be available on Disney+ Hotstar. This will give all the freedom in the world to Marvel to use Daredevil, Kingpin and other characters in their upcoming shows in whichever way they wish.

A revival of the Daredevil series and the return of Charlie Cox in Daredevil’s solo series is also a possibility. Given the popularity of the series, there is no reason why Marvel would not want to bring it back.

However they might have bigger things in store for the Man without Fear. According to reports, both Daredevil and Wilson Fisk might star in the upcoming Disney+ Hotstar series ‘Echo’ which is the origin story of Maya Lopez’s alter ego.

Marvel has a detailed strategy prepared for their upcoming movies and TV series. And the DefendersVerse characters are surely in their plans as well.

Also Read:- Charlie Cox reveals the future of Daredevil in the MCU