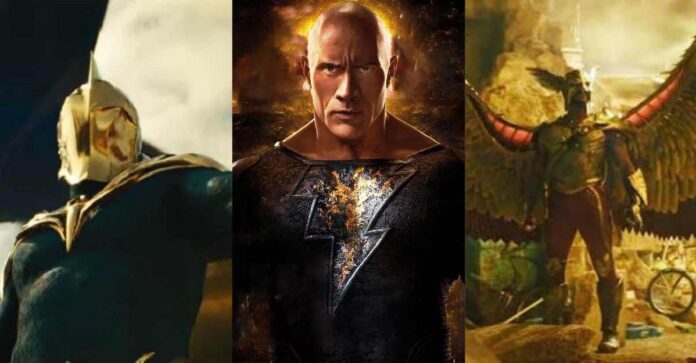 DC released a combined teaser video for their upcoming DCEU movies that are set to release in 2022 and 2023 and it contained some major details about the much anticipated Black Adam movie.

The Dwayne Johnson starring Shazam (2019) spinoff which is set to release on 29th July will be the origin story of one of the Strongest characters in the DC Universe, Black Adam. He has often been portrayed as an Anti-hero in the DC Comics but even for most parts (including the Shazam origin story itself), Black Adam has been shown as a negative character overall.

However, Black Adam will also mark the debut of a few other DC characters like Hawkman, Doctor Fate, Atom Smasher, Adrianna Tomaz and Quintessa Swindell. The teaser video gave us a first look of Hawkman and Doctor Fate. For the rest, DC has briefly teased their potential costumes by showing quick shots of their chest emblems at the DC Fandome. The fans are now eagerly waiting for a glimpse of the other characters.

The casting of the aforementioned characters in Black Adam, is as follows:-

The teaser video named ‘The World Needs Heroes’ also revealed some scenes of the upcoming DCEU movies like The Flash, Aquaman and the Lost Kingdom and The Batman, but the Black Adam teasers were hyped up the most.

It has been previously confirmed that all the characters apart from the main lead Black Adam will be appearing in the movie as members of the Justice Society of America.

Pierce Brosnan (who will play Doctor Fate in the movie) has talked about the casting of the Black Adam in a recent interview. In it, he talked about the perfect casting of Dwayne Johnson and also the other actors. “He is magnificent as Black Adam. We are the Justice Society and there’s four of us, so we became a strong quartet of actors.”

Black Adam is the arch nemesis of Shazam. Moving forward, the big plan of DC would definitely be to bring the two characters together in an upcoming movie for a big scale battle between them.

Marvel has pretty much created a monopoly in Superhero movies. Black Adam could finally provide DC with the golden opportunity of breaking that chain and making a blockbuster DCEU hit in the days to come. But much of that responsibility rests on the shoulders of Black Adam and Dwayne Johnson.