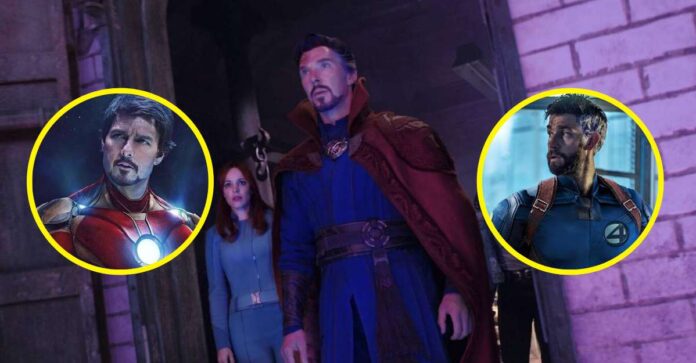 The rumors for Doctor Strange: Multiverse of Madness have been insanely exciting in the last few weeks. From X-Men to Fantastic 4 and Tobey Maguire’s Spider-Man – many characters from across the Marvel Multiverse have been rumored to make an appearance in MCU’s upcoming Magnum Opus which is set to release on 6th May, 2022.

While most of these leaks and claims have no clear evidence, one of the biggest rumors about the movie might have just been confirmed by a Marvel Creator himself !

Yes you heard it right. Famous American Comic book creator Rob Liefeld who is popularly known for having created the much loved character Deadpool has just confirmed the rumors of a possible Tom Cruise and John Krasinski appearance in Doctor Strange: Multiverse of Madness.

Rumor had it that the Mission Impossible star will make his Marvel debut in the upcoming movie as a superior version of Iron Man from an alternate dimension who is in control of much advanced tech. According to the reports, he is also the commander of Ultron bots in his universe and thus is extremely powerful.

Recent claims also suggested that the Office and Jack Ryan Actor John Krasinski will be appearing in the movie as Mr. Fantastic or Reed Richards.

Earlier there were rumors that John Krasinski’s real-life wife Emily Blunt (Who starred in Jungle Cruise) would be cast as Susan Storm a.k.a Invisible Woman, who is Reed Richards’ wife in the Fantastic 4 line up.

However, she straightaway brushed off those rumors on being asked back in May 2021. She said that those were nothing but fan castings. Emily Blunt said, “That is fan-casting. No one has received a phone call. That’s just people saying, ‘Wouldn’t that be great?’”.

While John Krasinki’s appearance was nothing but a theory, there were actual leaked images of Tom Cruise that confirmed his appearance in Multiverse of Madness. Just take a look at this –

After these rumors went viral overnight, Deadpool creator Rob Liefeld confirmed that much of it was true and there was no denying that.

Rob Liefeld said, “Here’s the deal you all know, I want to know — have either of you been caught trying to sneak into a screening of Doctor Strange 2? …They are testing the s**t out of this movie. The thing is, uh, they’re testing, it’s all getting out.”

The former Marvel creator revealed that many of these rumors are indeed true but he didn’t name any.

“We’re all hitting those hashtags and we’re like, ‘Oh c**p! They’re showing this. People are seeing this.’ I think it’s safe to say some of the stuff, you just said that’s out there, it’s happening. It’s in, it’s been seen,” he said.

So will you want these two actors making their MCU debuts in Doctor Strange: Multiverse of Madness? Or did you like the previous casting of these characters better?