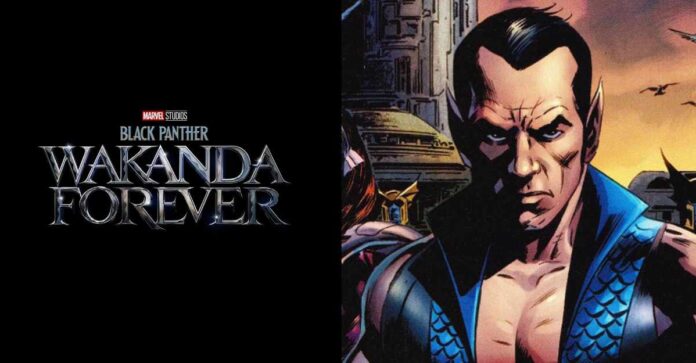 Wakanda Forever will be the third major movie of the Marvel Cinematic Universe in 2022. The much-awaited sequel of Black Panther (2018) started filming on June 29, 2021, but it was halted for quite some time due to the surge of COVID-19 cases. The filming process is almost halfway completed and fans are eagerly waiting for a first look. Meanwhile, a leaked picture from Wakanda Forever’s sets has fuelled major speculations about the movie’s plot.

Atlanta filming posted a leaked image from the movie’s sets. In it, we can see the camera crew shooting a scene in a large pool. Seeing the pictures, it is being rumoured that the Lost City of Atlantis and its King Namor a.k.a ‘The Submariner’ will play a big role in Wakanda Forever.

The appearance of Namor in Black Panther 2 was anticipated being since 2021. It was rumoured that Mexican actor Tenoch Huerta (featured in Narcos and Spectre) was cast as Namor. Warlord Attuma and Namor’s cousin Namora can also appear in the movie.

Who is Namor ‘The Submariner’?

According to Marvel Comics, Namor McKenzie was the son of Leonard McKenzie who travelled to the Antarctic in search of Vibranium. There he met Princess Fen, the princess of Atlantis, and impregnated her. After Princess Fen was pregnant with their child, Atlantean soldiers came to retrieve Fen and it was believed that they killed Fen.

Princess Fen thus gave birth to Namor in Atlantis and he came to be known as the Avenging son and was Marvel’s first Mutant. He grew up to become the King of Atlantis.

The two hidden kingdoms – Atlantis and Wakanda, were constantly at war with each other for Vibranium. It is thus being theorized that Namor a.k.a the Submariner can be portrayed as the antagonist in Wakanda Forever.

What we know about Wakanda Forever

After the untimely demise of Chadwick Boseman (MCU’s T’Challa), Marvel had to make some significant changes in Wakanda Forever’s plot. Although nothing is confirmed yet, there have been two major theories about the future of Black Panther in MCU. While some reports say that T’Challa’s sister Shuri, who was portrayed as one of the most brilliant minds in the Marvel Cinematic Universe (in Black Panther and Avengers: Infinity War), will be given a major role in the upcoming movie, other reports suggest that M’Baku will be made the next Black Panther.