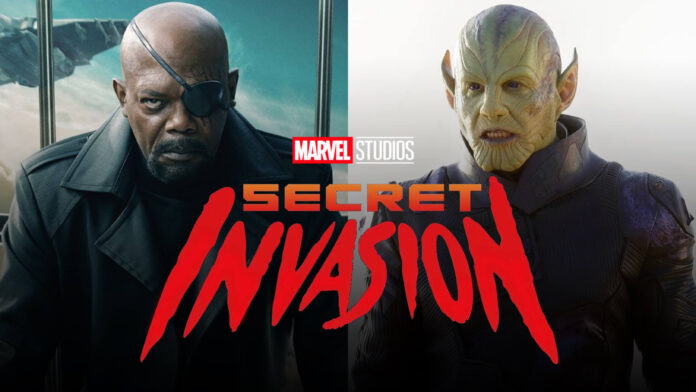 Yet another set of leaked photos from the sets of the upcoming Disney+ MCU series Secret Invasion has resurfaced on the internet and fans are trying to figure out what the scenes.

The Shooting of Secret Invasion has given out many leaked images already and Marvel needs something to stop it lest some big detail be released online before release.

Earlier, a video from the set in Halifax, England had gone viral on social media. It showed some sort of an explosion scene and Samuel L. Jackson, Cobie Smulders, Kingsley Ben-Adir were all present for the scene. Game of Thrones fame Emilia Clarke, who is supposed to make her MCU debut through Secret Invasion was also present on the set for a post-explosion aftermath scene. It is unknown as to which role Emilia Clarke will play in the series.

A Reddit user has now shared some more leaked images from the sets of Secret Invasion. There are 4 pictures to be precise. The first one shows someone putting on the makeup of a Skrull on an actor. The second image shows an underground stage set. The third picture shows a Police car and the fourth image shows some scenes being shot in the woods.

What to Expect in Secret Invasion

The Underwater stage set has some sort of a pool and fans think that it might be the Hidden city of Atlantis. We know that Namor and Atlantis will play a big role in Black Panther 3 (‘Wakanda Forever’). As it will release ahead of Secret Invasion, we might expect to see Atlantis in the series Secret Invasion as well.

The Secret Invasion was originally set to release in the latter part of 2022 but it seems like early 2023 will be more perfect. The series will revolve around a threat of Skrull takeover of Earth and Nick Fury and his team’s attempt to stop it. It will be roughly based on the famous Marvel comicbook series with the same name.

In the last scene of Wanda Vision, we saw Monica Rambeau being escorted by a Skrull agent to probably Nick Fury in the Space. We could thus expect to see Monica Rambeau’s cameo in the series as well.