Who is the Glowing thing in Multiverse of Madness Trailer? Two theories explained 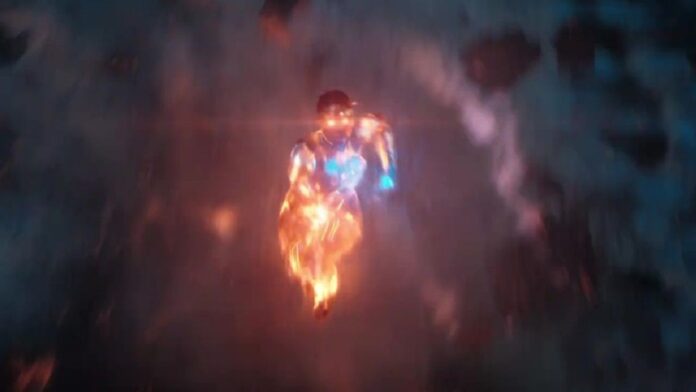 After Marvel released the much-anticipated trailer of Doctor Strange in the Multiverse of Madness two days ago, the fans were seemingly confused about a particular scene wherein a mysterious glowing figure attacked Wanda Maximoff.

The scene appears midway through the trailer and is supposedly set in the Illuminati Headquarters. The glowing thing initially appears to be Captain Marvel or Human torch but a better peek at the 60fps clip which was released today shows us clearly that it is not what we think it is.

Wanda’s fight with the Glowing thing

Well first things first, what the hell is Wanda even doing in the Illuminati headquarters, to begin with. Yes Doctor Strange was shown to be arrested by the Illuminati and they brought him to their secret headquarter but Wanda was not supposed to be there. And given her antagonistic character, which has been portrayed in the trailer of the movie, only a fool would believe that she was there to rescue Doctor Strange.

Well, the answer hides in her eyes in reality. Easter eggs have revealed a fascinating fact about Sami Raimi’s close up shot where he zooms into the eyes of a wounded Wanda Maximoff who is standing at the door of Illuminati headquarters.

The zoomed-in shot of her eyes shows two cages and according to rumours, the Illuminati has trapped her kids in those cages so that the Scarlet Witch can not come in contact with this alternate reality of hers.

This has infuriated Wanda Maximoff as she and her brother Pietro were treated the same way by Hydra and thus she has broken into the Illuminati HQ.

With all things considered, there are 2 theories as to who the Glowing thing can be and here we present them to you.

Seems like an eternity that rumours of Tom Cruise making his debut in the MCU as a Superior version of Tony Stark a.k.a Iron-Man started going viral. The makers of Iron-Man had originally considered casting the Mission Impossible star as Tony Stark instead of Robert Downey Jr in the first movie but decided otherwise later.

With the appearance of Iron Legions or Ultron Sentinels in Doctor Strange in the Multiverse of Madness Trailer, it is almost sure that we going to take a look at that alternate reality of Tony Stark in the upcoming movie.

The Superior Iron-Man was reportedly able to successfully execute the Ultron Program and thus the Iron Legions initiative never failed.

A close-up look at the glowing thing that attacked Wanda in the Illuminati HQ shows an armour covering its face that is very close to the renders we have seen for Tom Cruise’s Iron-Man suit. The close-up shot also reveals a goatee shaped Moustache that Tony Stark is famous for.

Iron-Man was originally the founder of the secret Superhero organization Illuminati and the appearance of Superior Iron-Man thus makes sense. We would expect him to have access to the entire Illuminati HQ and it is obvious that he would attack Wanda if she tried to break into their facility.

The first character that comes to our mind after seeing the glowing figure is undoubtedly Captain Marvel as it goes binary like we have seen Brie Larson’s Captain Marvel do in her MCU appearances so far.

However, rumours and a close look at the shot reveal that the figure looks nothing like Brie Larson.

Many reports suggest that it is indeed Monica Rambeau or her Mother Maria Rambeau from an alternate reality where either of them received the Captain Marvel mantle.

However, it can also be Monica Rambeau from our Universe. She was split into many forms and received Supernatural powers when she crossed Wanda’s Westview pocket dimension a number of times. It would be really dope seeing her use her full powers and stand against Wanda in a fight.