Agatha: House of Harkness – Updates, Theories and Everything we know so far about MCU’s Agatha Harkness spinoff series 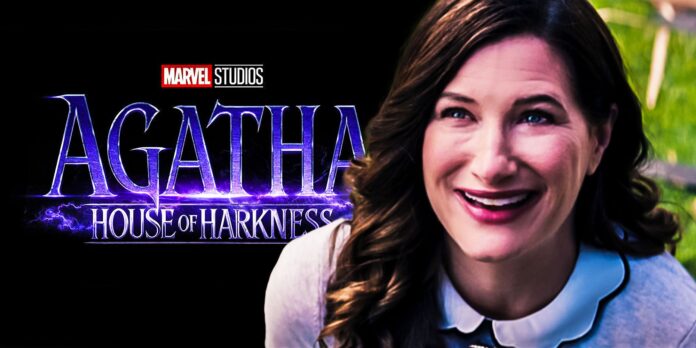 Marvel released their first Disney+ MCU series WandaVision back in January 2021 and it was an instant hit. The series finally saw Wanda Maximoff discovering her true potential as she became the Scarlet Witch. However, it also introduced us to some new characters and the most interesting one among them was undoubtedly Agatha Harkness played by Katharyn Hahn.

Who is Agatha Harkness?

The evil witch was portrayed as a normal neighbour in Wanda’s Westview Hex reality and only in the final episode did we realise that she was the main protagonist of the show all along.

Agatha Harkness a.k.a Agnes is a witch from Salem, Massachusetts who was accused by her own kind of practising dark magic. However, while she was in the Witch trial, Agatha Harkness absorbed the powers of all the other witches and gained their powers.

She was jealous of Wanda Maximoff as she could pull off some insanely powerful spells without any prior knowledge of Witchcraft. She thus started to mess with Wanda’s hex reality and in the final episode, she tried to harness Wanda’s energies.

It was she who told Wanda about the myth of the Scarlet Witch and showed her the Book of Darkhold. However, Wanda used her own teachings against her and defeated her to absorb her powers instead. After absorbing Agatha’s powers, Wanda finally transformed into the Scarlet Witch. She then stripped Agatha of her magical abilities and turned her into the nosy neighbour that she had pretended to be, permanently.

After the success of WandaVision, Marvel announced that they would be making a spinoff series on Agatha Harkness seeing the many reactions her character has received from the fans. It will be called Agatha: House of Harkness.

The project is, however, still in its initial phases and the shoot is not expected to start anytime before October 2022. We can thus expect it to release in the latter half of 2023.

Kathryn Hahn gives a promising update about the Series

Although the project is still in its production phase, Hahn said that its development thus far is “exactly what (she) would have hoped and dreamt.”

In the trailer of Doctor Strange in the Multiverse of Madness, we saw two versions of Wanda in her home at Westview. Her house is in a messed up condition and it suggests that the two have been in a fight. The Scarlet Witch Wanda is seated and seems heartbroken while the Wanda with a scar in her head touches her alternate self.

Given Agnes’ character of the nosy neighbour, it won’t be a surprise if she comes to check out what’s going on in Wanda’s house and sees the two figures, her spell might be broken in some way. It’s a possibility as Marvel will have to break Agatha out of Wanda’s spell before they can make a spinoff series on her.

Another theory suggests that Wanda, being unable to understand the true potential of the Book of Darkhold, will come to Agatha looking for answers and guidance and thus set her free.

Share
Facebook
Twitter
Pinterest
WhatsApp
Previous articleTom Holland is the reason why “The Falcon and the Winter soldier” was made – And Sebastian Stan hates it!
Next articleAvengers: Endgame Director Joe Russo talks about MCU’s Multiverse trend