Who is Gorr the God Butcher? Comic origin, Powers, Weaknesses, History and Future in MCU 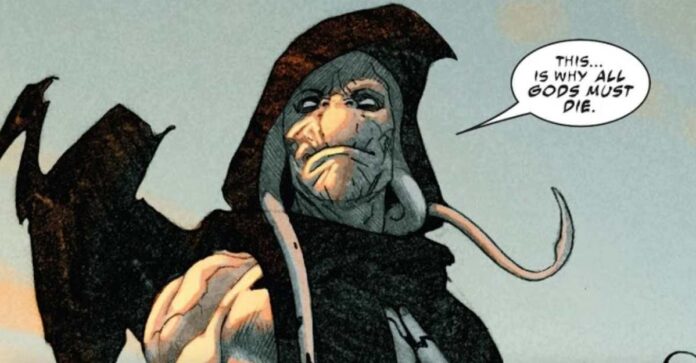 Gorr the God Butcher is one of the strongest villains in Marvel comics who is yet to be introduced in the MCU. However, fans will not have to wait much longer to see this almighty antagonist on the big screen as he is set to make his MCU debut in the upcoming Marvel movie – Thor: Love and Thunder.

Although little is known as to which aspect of Gorr will be exploited in the Marvel Cinematic Universe and where he will rank on MCU’s power rankings, it is important that we know to learn about his origin, powers, abilities, weaknesses and history according to Marvel comics.

After all, Gorr is one of those characters who the fans could connect with as the reason why he turned rogue is very relatable. His motives and methods might be wrong but he once used to be a good guy.

Let us now learn about the character in detail.

Gorr the God Butcher was born on an unnamed planet that was extremely unresourceful and almost uninhabitable. Its residents suffered from poverty and starvation every single day. Gorr’s life, not unlike all the other residents of the planet, was extremely miserable. However, the one positive thing about all of them, including Gorr, was that they were very religious and believed in gods.

Gorr lost his father and mother at a young age. He later married Arra and they had a family together. Unfortunately, Arra died during an earthquake while being pregnant and most of their kids died of starvation. Only one of their kids, a boy named Agar remained.

Grief-stricken by the loss of his family, Gorr questioned the very existence of Gods. He said there were two possibilities – either Gods did not exist and thus they did not come to save them, or they were evil and had fun seeing their miseries.

Gorr’s own God-loving community banished him for his anti-god stand and sent him on an exile.

While in exile, Gorr wished to kill himself but then he saw two gods battling each other. One of them was the God of Symbiotes Knull and the other was a purple-skinned god wearing golden armour.

Knull died in that battle and the other god was on the brink of dying. Gorr, infuriated by his theory (that if gods exist they are evil) being proven right, absorbed the powers of Knull’s prime weapon – the All-Black Necrosword and killed the god himself. He thus took the name of ‘God Butcher’ and set on a mission to kill all gods in the Universe.

Gorr the God Butcher vs Thor

Gorr the God Butcher is often considered to be the biggest rival of Thor Odinson in Marvel comics.

The two characters first met in the 9th Century when Gorr killed a god from the Americas and some Slavic gods. Young Thor was on Earth at that time and he soon encountered Gorr the God Butcher.

Gorr almost killed Thor was the Asgardian was able to conjure a lightning strike that knocked both of them. Gorr escaped to a cave and there he fought Thor again. This time too he defeated him and tortured him for 17 days straight to know the location of Asgard. However, Thor wouldn’t budge and his Viking worshippers finally came to help him.

Thor could thus chop the hand of Gorr and thought that he had defeated him.

Gorr’s comeback and the creation of The Godbomb

Gorr somehow managed to recover from Thor’s attacks and he kept on killing gods for the thousands of years to come. He also became extremely powerful during this time and made himself an army of Dark Minions to help him. He also conjured his wife Arra and son Agar back to life with the help of the All-black Necrosword.

He killed the Time Gods and used their powers to travel through time. He travelled back in time to kill one of the first elder gods. He then travelled into the future and enslaved every single god except the All-Father Thor. Using his enslaved Gods, he built the Godbomb for the next 900 years. The Godbomb could kill all the Gods across all timelines at a single go and was immensely powerful.

Gorr brought Young Thor, who he defeated many thousand years ago, to his timeline and enslaved him too. Meanwhile, Thor the Avenger travelled to Gorr’s timeline to defeat him. When Young Thor attempted to destroy the Godbomb, he failed and was thrown out of the planet where he met All-Mighty Thor and Thor the Avenger.

The three teamed up against Gorr and tried to kill him. But having absorbed the powers of so many Gods, Gorr was more powerful than ever before and he defeated them all. He then activated the Godbomb.

When Gorr’s re-incarnated wife Arra called him a God, Gorr killed her angrily and that infuriated his son Agar.

Agar revolted against his father saying that he had become everything that he once stood against. He thus supported the Thors. Using the prayers of Agar and the countless other Gods, Thor absorbed the explosion of the Godbomb and also the Necrosword. Agar named Gorr the God of Hypocrisy and Thor finally killed him.

Gorr the God Butcher: Future in the MCU

As we mentioned earlier, Gorr the God Butcher is expected to make his MCU debut through Thor: Love and Thunder. Academy Award winner Christian Bale will be playing the role of Gorr in the movie.

However, it is unknown whether he would be killed off in the movie or he could possibly appear in some other MCU projects in the future.

Thor: Love and Thunder is expected to release in the second half of 2022.