How is Ms Marvel connected to Captain Marvel? 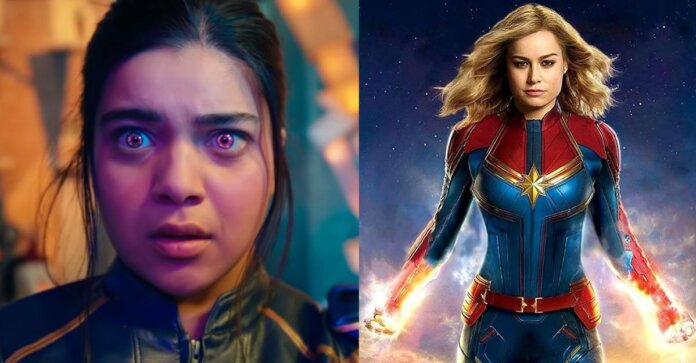 Marvel has finally released the trailer of their upcoming Disney+ MCU show ‘Ms Marvel’ which will serve as the origin story and the MCU debut of the namesake superhero. However, due to the similarities in the character’s name with another very famous character Captain Marvel, who is arguably one of the strongest superheroes in the Marvel Cinematic Universe currently, many fans might get confused between Ms Marvel and Captain Marvel. In this article, we aim to solve this confusion once and for all.

Not only do Captain Marvel and Ms Marvel have similar names, but from what we can understand from the first trailer of Ms Marvel, they have sort similar powers too. Although in Marvel Comics the powers and abilities of the two superheroes are completely different, Marvel has apparently given her similar abilities to Carol Danvers as Ms Marvel is a huge fan of hers and it is going to be a big aspect of the series.

Kamala Khan is a Pakistani-American youngster who is a massive fan of Captain Marvel a.k.a Carol Danvers. In the first half of the trailer we are shown a figurine of Captain Marvel and the way in which Kamala looks at her, it is clear that she is a big idol and inspiration for her. Let us now take a look at the reason behind the similarity in their names.

When Marvel comics first introduced the character of Captain Marvel, he was a male Kree military officer who was sent to earth to keep an eye on the technological advancements of Humans who were very close to discovering Space travel. The character’s name was called Mar-Vell and he later took up the title of Captain Marvel.

Gradually, Mar-Vell became too fond of the Humankind, became their protector and deserted the Kree empire. He had very similar powers to that of MCU’s Carol Danvers.

According to Marvel comics, Carol Danvers did not receive her powers from the Tesseract. Yes, she was an Air Force Pilot and the whole part about the explosion was true but her true powers came after her DNA fused with that of Mar-Vell and thus she got her powers directly from the Kree Superhero.

Carol soon joined the Avengers and took up the Superhero name Ms Marvel.

Taking up the Captain Marvel mantle

Marvel released ‘The Death of Captain Marvel’ comic-book series in 1982 which was centred around the after-effects of Mar-Vell’s demise. Following his death, his children Genis-Vell and Phyla-Vell took up the Captain Marvel mantle. However, everyone who took up the name either died or decided to take up a different name in the future,

It was then that Carol Denvers took up the mantle of Captain Marvel.

Kamala Khan takes up the mantle of Ms Marvel

Marvel created the character of Kamala Khan very recently in 2014. As mentioned earlier, Kamala Khan idolised Captain Marvel from a very young age and thus on discovering her superhuman abilities, she took up the Mantle of Ms Marvel, a name which was first used by Carol Danvers, as a sense of respect towards her idol. According to rumours, Marvel is going to use this link to bring in Ms Marvel in their upcoming movie ‘The Marvels’ which will feature Carol Danvers and Monica Rambeau as well.

Kamala Khan will be the first Muslim superhero to get her own solo series under the Marvel label. She has powers like shapeshifting, elasticity and more. The series will release on Disney Plus on June 8, 2022.