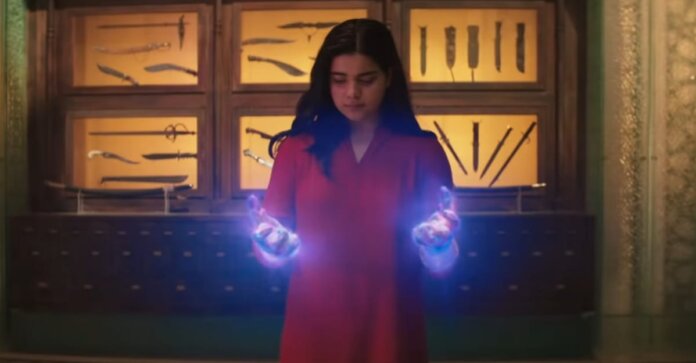 Marvel has finally released the trailer of their much anticipated Disney+ MCU show Ms Marvel will serve as the origin story and first official MCU appearance of the namesake Superhero. Kamala Khan, a.k.a Ms Marvel is the first Muslim superhero to get a solo series under Marvel’s label. The character of Ms Marvel is being played by 19-year old Pakistani-American actress Iman Vellani.

In this article, we will be reviewing the first trailer of Ms Marvel and breakwing it down. We shal also be talking about the Easter eggs and Hidden details in the trailer (if any).

One thing that Marvel fans observe very keenly in every Marvel trailer is the intro or the Studio Banner. It is not unknown that Marvel designs specialised intros for each of its projects. For example, the recently released trailer of Doctor Strange in the Multiverse of Madness has a Blueish purple coloured Marvel intro with a Gargantos like animation while the trailer of Spider-Man: Across the Spider-Verse shows an animated intro.

The intro of Ms Marvel is unique in its own way. It is a half live-action half comic kind of intro. In fact, it looks like Kamala Khan is thinking about comicbooks in the first scene and then we move into the intro.

The first part of the trailer is also done in comicbook style with the caption of each character appearing in comic book clouds. However, this is ironic as the MCU version of Ms Marvel is far away from being comic-book accurate.

In Marvel’s Ms Marvel comic series, Zoe Zimmer was originally portrayed as one of the girls who bullied her in school. The girl with animated devil’s horns in the trailer is probably Zoe Zimmer and it is clearly understandable by the way she taunts her.

However, later on in the comics, Zoe also becomes one of Kamala’s best friends and one of the only people to know her identity as Ms Marvel. Although it is unclear whether we will see MCU going through that path.

Kamala is a big Avengers fan

In the first few scenes of the trailer itself, it is clear that Kamala is a big fan of the Avengers. She was drawing the superheroes in her notebook and thinking about the comicbooks in the very first scene. A few scenes later, she is seen wearing an animated Avengers T-shirt which. One of her friends points it out by saying “Kamala, another Avengers shirt”. This shows that she owns quite a few of them and is thus clearly a big Marvel nerd.

The one Avenger that Kamala is particularly very fond of is undoubtedly Captain Marvel. She has her on all of her shirts and she also sees herself wearing a Captain Marvel uniform and jumping through the window in one of her dreams. The way she looks at the Captain Marvel Uniform also proves the fact further. In fact, her own Superhero costume fully resembles that of Captain Marvel.

It can be very well established from the first trailer that our youngs superhero often gets lost in her fantasy land. In fact, the word ‘Fantasy Land’ has been mentioned in the trailer twice.

She dreams about all sorts of things – From the hottest guy in the High School proposing her, to people celebrating her for being a Superhero. This probably shows to the audience that Kamala is after all just a high school student and a very young and immature girl.

Portraying her religion and Culture

As mentioned earlier, Kamala is the first Muslim superhero to get a solo Marvel project. She is a Pakistani-American girl and that has been beautifully portrayed in the trailer with a scene where she prays in a Mosque.

A scene also shows her mother scolding her for wearing the Superhero costume which, just like every typical Brown parent does.

The Source of her Powers

Apparently, Marvel will be changing the source of Ms Marvel’s powers in the MCU. According to Marvel comics, Kamala Khan is an inhuman which is how she gets her powers. However the trailer suggests that in the MCU, the character will derive her powers from a Bracelet kind of like DC’s Green Lantern.

Kareem a.k.a Red Dagger is an original character from Ms Marvel comic series who will be appearing in the MCU series as well. He can be seen in just one of the scenes of the trailer and fans are very excited to see this character as well.

Also Read:- How is Ms Marvel connected to Captain Marvel?