Marvel confirms the Villain of Thor: Love and Thunder and also reveals his Weapon – This famous Hollywood star will play the role 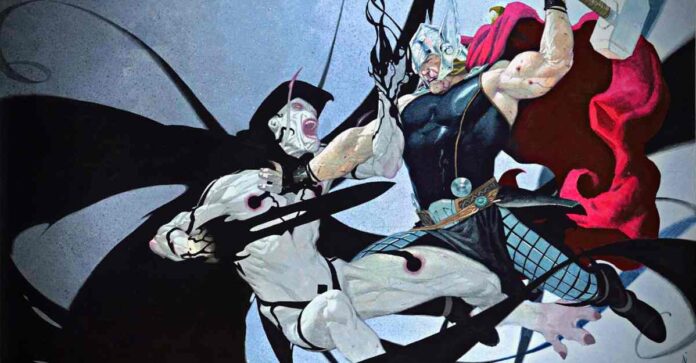 While the world is busy anticipating the events of Doctor Strange in the Multiverse of Madness, Marvel is busy working on yet another Magnum Opus which is set to release in the latter half of this year. Yes, we are talking about Thor: Love and Thunder, the third instalment movie of the Chris Hemsworth starring superhero series.

Marvel’s previous works in the Thor line of movies include Thor(2011), Thor: The Dark World(2013) and Thor: Ragnarok(2017). Although it is a widely accepted fact that the Odin-son is perhaps the strongest Superhero in the MCU, his individual movies were not that successful, to begin with. Luckily that ended with Thor: Ragnarok which was a blockbuster hit (many consider it to be the greatest Marvel movie ever). After the success of Thor: Ragnarok, Marvel gave a green signal to the fourth Thor movie as well.

Although very little is known about Thor: Love and Thunder, Marvel might just have confirmed the villain of the movie. An official lego set for the movie reveals that the antagonist in it will be none other than Gorr the ‘God Butcher’ who is famously known as the wielder of the almighty Necrosword (‘All Black’).

Who is Gorr the God Butcher? What is his role in Thor: Love and Thunder?

According to Marvel comics, Gorr was the resident of a very poor planet that and his race was on the verge of extinction. However, all of them, including Gorr, were mighty believers in God. They somehow found a way of resurrecting their faith in God despite all of their hardship.

However, things worsened and Gorr’s entire family died of starvation. He thus lost his faith in god. He said that Gods either do not exist or they are evil as they never came to rescue them from their gruesome lifestyle. As a result, he was banished by his own ‘Religious’ community.

While in exile, he witnessed two Gods fighting till death. He thus became certain that his second theory that Gods are evil, was indeed true. When both the gods died, the weapon of one of them got attached to Gorr and bonded with him giving him immense powers. The God was none other than Knull, who is popularly known as the father of all Symbiotes (including Venom) and the weapon was the Necrosword.

With the use of the power he gained, Gorr went on a mission to kill all the Gods in the world and he eventually met the Mjolnir wielding God of Asgard. This might be inculcated in the storyline of Thor: Love and Thunder.

Who will play the role of Gorr?

According to many rumours, Academy Award winning actor Christian Bale is set to feature in the Thor: Love and Thunder as Gorr. Although nothing is confirmed yet, this is one rumour that everyone is excited for.