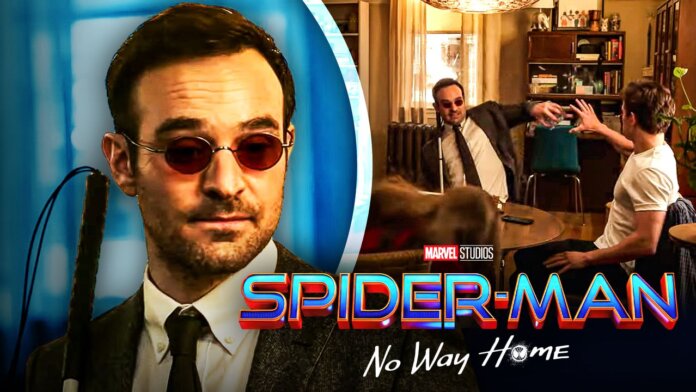 The appearance of Charlie Cox as Matt Murdock a.k.a Daredevil in Spider-Man: No Way Home marked the official entry of the much-loved character into the Marvel Cinematic Universe. The rights to Daredevil were held by Netflix until 2020 and now that Marvel has got back its fan favourite character, they have planned to put him to the best use possible.

Matt Murdock appeared as the attorney of Peter Parker in Spider-Man: No Way Home after the entire world came to know about the real identity of Spider-Man. Although Charlie Cox appears on-screen for just one scene, he just kills it and wins over the audience instantly. His cameo was one of the most cheered for scenes in the movie and his ‘I am a very good lawyer’ quote after catching a rock thrown through the window gives fans a flashback about his true powers and his un-ignorable style.

In the scene, Murdock advised Happy Hogan to get a very good lawyer as he will be questioned about the missing Stark tech involved in the Mysterio murder case. Although we do not get a continuation to that in the movie as the focus moves on to Peter and his friends Ned and MJ’s inability to move into a college due to the controversy and then obviously the surprising appearance of Spider-Man villains from the past.

The Deleted Matt Murdock scene from No Way Home

However, Marvel has now released a deleted scene from the movie which shows Matt Murdock (Charlie Cox) sitting with Happy Hogan as his lawyer in a hearing which implies that the Daredevil actor had shot a number of other scenes for the movie which was then decided to be chopped off in the final edit.

Talking about the deleted scene, Charlie Cox revealed in an interview that He and Jon Favreau had actually added a Foggy Nelson (Matt Murdock’s assistant) easter egg in the deleted scene. The actor said, “I don’t think they used it, but we added a little Easter egg where he goes, ‘Yeah, I’m a little foggy on how that happened’ or something.”

What next for Daredevil in MCU?

Now that Marvel and Disney have received back the rights to Daredevil, it is being rumoured that the much loved Daredevil series might get a Disney+ reboot. Moreover, the protector of Hell’s Kitchen will also appear in several other upcoming Marvel movies and series. It has already been confirmed that Matt Murdock will appear in the Disney+ shows Echo and She-Hulk.