Where are Wanda’s Kids? Multiverse of Madness Trailer gives away a big clue 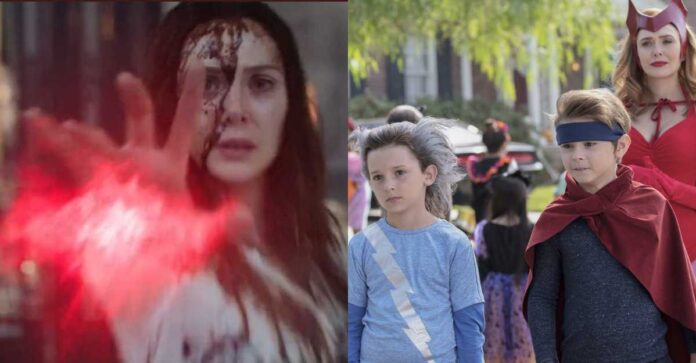 Marvel’s Disney+ show Wanda Vision was very important for the character development of Wanda Maximoff as she is going to play a key role in MCU’s phase 4. She was seen tapping into her true potential in Wanda Vision and she also transformed into the Scarlet Witch for the first time in MCU, after absorbing the powers of Agatha Harkness in the season finale. Her role in Doctor Strange in the Multiverse of Madness will be particularly very intriguing.

In Wanda Vision, we witnessed Wanda Maximoff creating a hex or an alternate reality within the city of West View to reincarnate her love interest Vision while trapping the locales of the city. She and Vision gave birth to two twin boys (named Billy and Tommy within the hex. Unfortunately, when she had to open the hex up, it also meant that she would be losing Vision, Billy and Tommy – and she did so.

However, in the post-credit scene, we saw Wanda’s astral projection reading the Book of Darkhold and exploring the Multiverse in search of her sons. It was then that she could hear the voice of her sons and the scene cut to darkness.

All that Scarlet Witch a.k.a Wanda Maximoff wants right now is to get back her kids and she sided with Doctor Strange for the same reason. She wants to travel through different realities to find her sons.

This might be the reason why many think Scarlet Witch might be the antagonist of Multiverse of Madness. Theories claim that it is Wanda Maximoff who sent Gargantos and the other dangerous creature that we saw in the trailer to capture America Chavez.

America Chavez can open star-shaped portals to any dimension, universe or timeline she wishes to travel to and Wanda seemingly wants to absorb her powers in order to succeed in her plan to find her kids. The Multiverse of Madness will probably focus on this dilemma very closely.

But where exactly could Wanda’s kids be? The Trailer of Doctor Strange in the Multiverse of Madness might have already given us that answer.

Well, we saw Wanda fighting the glowing thing at Illuminati’s headquarters and in the very next scene, a blood-stained Wanda Maximoff was standing at the door of Illuminati, casting an offensive spell.

When the camera zoomed into, we could see the reflection in her eyes and it gave away a big detail. There were two cages in the reflection and that was where Wanda was aiming.

Have the Illuminati arrested and caged Billy and Tommy !

Well, it is highly likely given their role as the keepers of the sacred timeline in the multiverse. The Illuminati would contain any threat to the Multiverse and as they are aware of the powers of Scarlet Witch, they know what she could do to attain her kids and break laws of reality in the attempt.

However, it might also be a trap set up by the Illuminati to arrest or even kill Wanda! Anything might be possible as we do not know their objective yet. We can only find it out in Doctor Strange in the Multiverse of Madness on 6th May.

What do you think – Is it possible that the Illuminati have caged Wanda’s Kids?