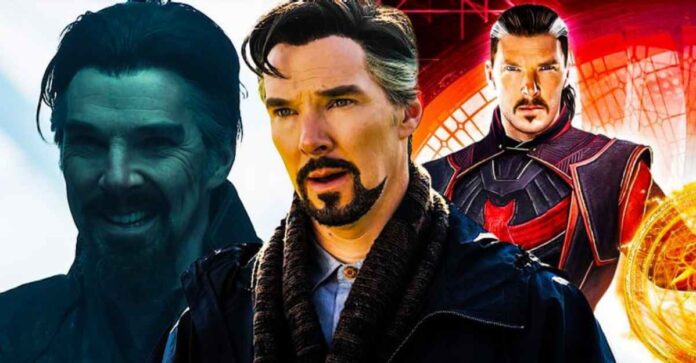 The much anticipated upcoming MCU movie, Doctor Strange: Multiverse of Madness, is set to release in less than three months and the Marvel Studio is yet to release its trailer.

The teaser of the Doctor Strange (2019) sequel was shown first in the post-credit scene of Spider-Man: No Way Home and it was released officially about two months ago. Although all sorts of rumours regarding Marvel’s upcoming Magnum Opus is being propagated on the internet, nothing has been confirmed from the Studio’s side and fans are eagerly waiting for the trailer.

Amid such a situation, a promo art of Doctor Stange: Multiverse of Madness has finally been released by the studio and it shows not two but three variants of the beloved sorcerer!

The teaser had already showed us a glimpse of Evil Strange who reminded us of Strange Supreme from Disney’s animated “What If…?” series.

What we know about Evil Strange

Disney’s “What If…?” showed us an alternate version of Doctor Strange. In his universe, Doctor Stephen Strange had lost the love of his life, Christine Palmer, in the car accident. He then reached Kamartaj in search of answers and ended up becoming the Sorcerer Supreme.

However, his wish to bring Christine Palmer back to life could not be realised as it was an ‘Absolute point’ in time. Dr Strange needed an immense amount of power to even attempt to change his reality. Thus after an age-long process of consuming demons from another dimension, he gained infinite power but with it, also the evilness of the beings that he consumed.

This ultimately led him to fight with the pure Dr Strange which he won comfortably. However, his attempt to bring Christine Palmer back broke the sacred timeline and destroyed his universe in the process, trapping Strange Supreme in a cage of his own creation.

According to many, the Evil Strange, who Mordo said was the actual threat to the Universe, is the same variant of Dr Strange that was shown in ‘What If…?’ episode 4.

What we know about Defender Strange

However, the Promo art which has been recently released revealed another variant which is an older version of the former Sorcerer Supreme. Reports claim that he is Defender Supreme, who in his universe, is a part of the Defenders.

Rumour has it that Defender Strange comes from a universe where the Defenders exist and MCU Strange might get inspired from him and start a similar group in his own universe, of course, if he can save it.